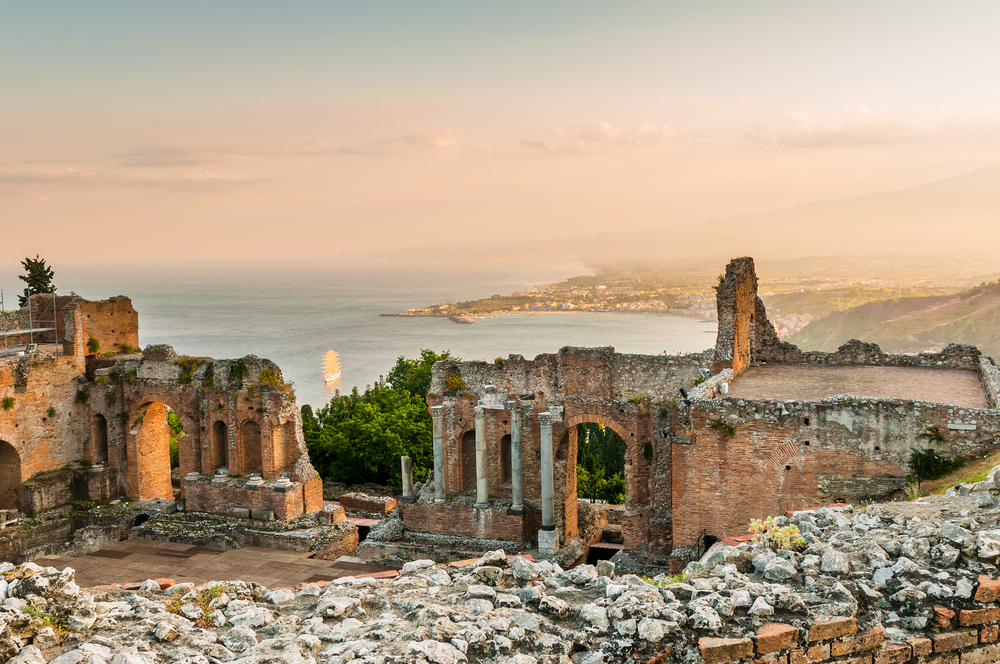 Taormina is a small town on the east coast of Sicily known for its beaches and also known to be a place of cultural richness. Perched on a cliff, Taormina was a center for European artists and writers during the early 20th century.

Taormina is situated on ancient grounds. The center of the town is 250 meters above sea level and there is a Saracen castle reaching up 150 meters above the town. The castle was built there so as to prepare the town for potential dangers or prevent attacks. Within the city, modernity and ancient ruins are mixed together. The balance between the two shows how much Sicilians respect their past, their history and their heritage. Ruins are left for visitors to see and locals to sit and pass their evenings on. A particularly important place is the ancient theater, a celebrated and loved ruin of Sicilians. The building is almost intact, it is made of brick, giving evidence that the structure is more Greek than Roman. Its diameter is 109 meters, making it the second largest theater in Sicily after the one in Syracuse. Today it is still used for theater purposes and performances.

The infamous Mt. Etna, Europe’s largest active volcano is about 45 minutes away. It can be visited or simply seen from the center of Taormina. Gushing red lava and spitting smoke, Mt. Etna has notoriously erupted many times over the centuries. The latest eruption was in December 2015 during which a lava fountain could be seen clearly from Taormina and reached heights of 1 kilometer with volcanic ash reaching up to 3 kilometers high. There are only 11,000 people living in Taormina but that does not stop it from being a cultural center and home to interesting events. With its mild climate, there are performances almost year round, with opera, pop and classical concerts by some of the best artists and performers of Italy. There is also the Taormina Film Fest, a very popular and reputed festival, celebrating Italy’s finest actors and actresses.

Taormina possesses an aura which through its time has inspired many and continues to do so today. Such artists inspired by Taormina’s beauty have been D.H. Lawrence, who wrote many of his poems and novels there, Truman Capote who also wrote there, and Goethe, who payed homage to his favorite place in his book, Italian Journey. Throughout most of the 1920s, Taormina was filled with some of the biggest celebrities, intellectuals and writers who either lived there or spent a good amount of time there, relaxing and entertaining friends.  Most recently, Mark Knopfler dedicated a song to Taormina, called “Lights of Taormina” in 2015.