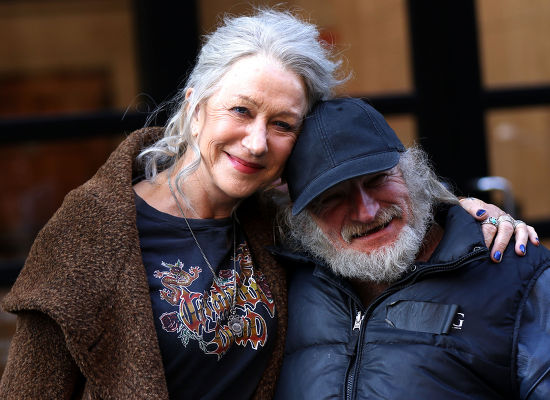 “Wherever I go I’m radioman, I’m not radioman without that radio, without it I feel powerless.”

Radioman – the man that Tom Hanks calls a cultural institution and Meryl Streep calls a good luck charm – has often been in the headlines over the years pictured with many A-list stars. He is the full-bearded eccentric movie fan who used to be homeless but turned into inspiration as he overcame severe alcoholism to realize his dream as part of the New York Film industry. He is often seen in the background of movies and TV shows filmed in New York.

Radioman was born in 1951 as Craig Castaldo. He grew up in Brooklyn, his father was a labourer, and his mother was an unsuccessful theatre model. His parents moved to Florida, he did not want to move with them, so this led to him living on the streets in New York City. For years Castaldo was fighting a serious problem with alcoholism and used to seek refuge in the Penn station of the New York subway. He eventually received treatment and has now been sober for many years.

Despite his difficult life, he was interested in the glamour of Hollywood, saying that he always wanted to be an actor or something in the movies as he loves everything about it.

It was while living on the streets when Castaldo used to heckle movie stars. He started hanging around the recording sets when they were filming on the streets, and he would ask for food or money and what they were filming. The sometimes crude but well-spoken Radioman would trade insults and joke with the stars. Soon his regular presence got noticed, and a couple of directors asked him to appear in the odd scene as himself.

Early on the TV detective series The Equalizer, starring Edward Woodward, filmed around Castaldo in the street he was helping a newspaper seller. One day it is said that he offered a fellow homeless man some beer – the man turned out to be Bruce Willis shooting The Bonfire of the Vanities.  He drunkenly shouted at Willis “I think your movie looks like a cartoon!” Later he was in Central Park and met Robin Williams filming The Fisher King. He asked Williams who he was and told Williams that they looked like twins as there is a resemblance between them, he then said he told Williams he wasn’t playing a homeless person in the right way and took him along to meet some of his homeless friends.

Castaldo’s Radioman is now a New York legend, a film set mascot and has been written about in New York newspapers and magazines. Whoopi Goldberg even took him to the Oscars one year as her guest when she hosted. Tom Hanks said “The man’s a cultural institution. You get on a first name basis with Radio, you know you’ve made it”

Castaldo has had cameos in well over 100 movies such as The Departed, The Bourne Identity films, Big Daddy, Shutter Island, Elf and Godzilla. Also, TV shows including 30 Rock and Its Always Sunny in Philadelphia. In many of the cameos, he has a portable radio or boom box hanging from around his neck which is where the nickname Radioman comes from.

A sensitively made documentary film called Radioman came out in April 2012. It features actors including George Clooney, Robin Williams, Meryl Streep, Tom Hanks, Josh Brolin, Johnny Depp, Matt Damon, Robert Downey Jr., Jude Law, Whoopi Goldberg, and Helen Mirren. The documentary explores Radioman’s life in detail and through interviews with these stars, it shows the bizarre life he had from homelessness to cameo actor as he travels around New York looking for film sets while entertaining everyone on set.