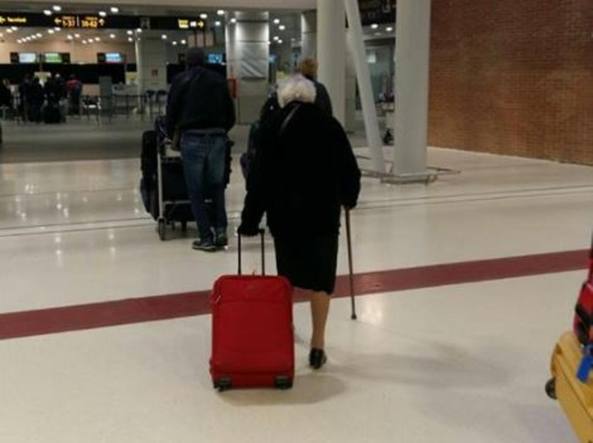 Italian nonna, 93, heads to Kenya to volunteer in orphanage

Meet Irma. Irma is going to Kenya to do voluntary work in an orphanage. Irma is 93.

Nonna Irma has become something of a celebrity in her native Italy after her proud granddaughter shared her story on Facebook this week.

“This is my grandma Irma, a young lady of 93, who set off for Kenya tonight,” wrote Elisa Coltro on Monday.

“Not to some tourist resort to be waited on hand and foot, but to go to a village of children, in an orphanage. I’m showing her to you because I believe that all of us should always keep a dash of recklessness in order to live and not just survive.

Nonna Irma, of Noventana Vicentina in Veneto, is travelling with her daughter, Elisa’s mother. “My mother sent me the photos from the airport and seeing my grandma, red suitcase and cane in hand, I felt so proud that I wrote the post,” Coltro told La Repubblica.

It was Irma’s idea to go to Kenya, Coltro said: having long made donations to an orphanage founded by an Italian missionary from her area, this year she decided that “donations weren’t enough, she wanted to make herself useful and and said to my mother: ‘Let’s go to Kenya. Or rather, I’m going and if you want you’re welcome to come too.'”

Mother and daughter are supposed to stay in Kenya for three weeks – “or perhaps my grandma will decide to stay and won’t come back,” joked Coltro. “It’s entirely possible, knowing her big heart and her energy.”

Irma, who lost her husband at 26 and later one of her three children, has spent her life helping people close to her, according to her granddaughter, who has done voluntary work herself in refugee camps in Greece.

“My grandma has always loved life and has never let anything stop her,” Coltro said. “She has always been an example for me.”

Now, hopefully, as thousands of people share Irma’s picture, she’ll prove an example to many more.