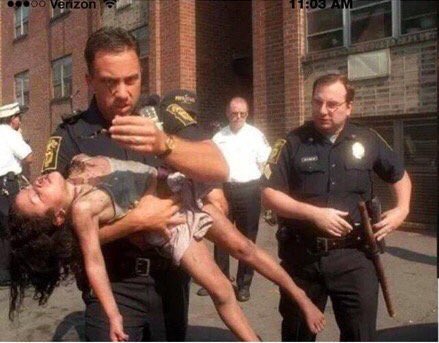 When Josi Aponte received her diploma from Eastern Connecticut State University last week, one very important guest was in the audience to cheer her on: the police officer who saved her life when she was 5.

“I almost died, but I was given a second chance at life,” Aponte told the Hartford Courant. “And it was because of Peter and all the authorities, everyone who came to help that day.” In the summer of 1998, Officer Peter Getz had just arrived at a burning apartment building in Hartford, Connecticut, when a firefighter handed him a 5-year-old girl who was unresponsive and covered in ash, the Courant reported.

With no time to wait for an ambulance, Getz placed Aponte in the back seat of his patrol car. He immediately began CPR while his partner drove the car to the hospital. Aponte, who had been in cardiac arrest, was breathing on her own by the time they reached the emergency room.

“I’m told that if he would have just waited a few more seconds for the ambulance to come in, I could have died,” Aponte told NBC Connecticut.

Getz continued to visit Aponte while she recovered in the hospital. He brought her a teddy bear the day after her uncle, who also was inside the burning apartment, succumbed to his injuries.

“It’s one of those things that touches your heart and stays with you,” Getz told the Courant. “The firemen did their job, I did my job, the hospital staff did their job. As a result, we still have a beautiful young woman still on the face of the earth.”

Getz told CNN that he “followed her progress for years” while Aponte was in school. They eventually lost touch when she and her family moved away.

Aponte reconnected with Getz two years ago, after finding an online photo of him carrying her away from the fire. She sent him a message and they’ve kept in touch ever since.

“He saved me and he’s just walking out with me in his arms,” Aponte told WFSB. “I’m so grateful for him because we always call him my guardian angel.”

When it was time for Aponte’s graduation, it was only natural for Getz to stand with her family and cheer her on.

“I kind of choked up after getting her graduation invitation,” Getz told “Inside Edition.” “She did really good.”