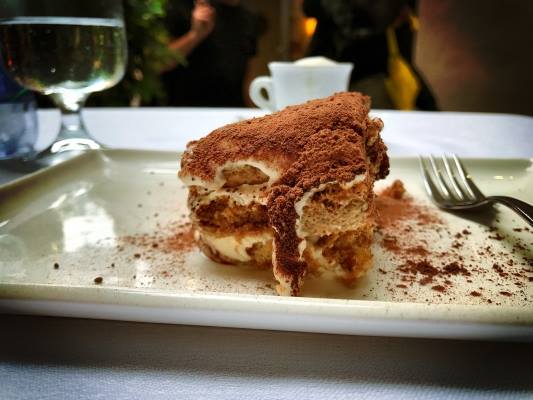 Campeol was the owner of Le Beccherie, a restaurant in Treviso in northern Italy where the famous dessert was invented by his wife and a chef.

The dish, featuring coffee–soaked biscuits and mascarpone, was added to their menu in 1972 but never patented by the family.

It has since become a staple of Italian cuisine, adapted by chefs worldwide.

There have been long-running disputes about the origin of tiramisu, including claims that it was served as an aphrodisiac at a brothel in the north Italian city of Trevisio.

However, it is widely accepted the recipe was developed in Campeol’s restaurant in the city.

Le Beccherie was opened by Campeol’s family in 1939, and Campeol took over the business at the end of World War Two.

According to the dessert’s co-inventor, Chef Roberto Linguanotto, the dish was the result of an accident while making vanilla ice cream.

Mr Linguanotto dropped some mascarpone cheese into a bowl of eggs and sugar, and after he noticed the mixture’s pleasant taste, he told Campeol’s wife Alba.

The pair then perfected the dessert by adding ladyfinger sponges soaked in coffee, and sprinkling it with cocoa – calling it “Tiramisù”, which translates into English as “pick me up”.

The dish appeared in print in a 1981 issue of Veneto, a local publication dedicated to food and wine, and it is now one of Italy’s best-known desserts.

Variants of tiramisu feature alcohol like rum or marsala, but the original recipe – certified by the Italian Academy of Cuisine in 2010 – was alcohol-free because it was intended to be child-friendly.

Step 1/5: Prepare the coffee and let it cool.

Step 2/5: Meanwhile, whisk the egg yolks with sugar until light and fluffy, and then gently incorporate mascarpone cheese into the mixture until you obtain a smooth paste.

Step 3/5: Once the coffee has cooled down, start dipping in the ladyfingers one by one, being careful not to over-soak them.

Step 4/5: Arrange ladyfingers in a single row at the center of a round serving plate, and spread half of the cream over them. Repeat the second step with the remaining 30 coffee-dipped biscuits, and arrange them on top of the first layer.

The main thing when preparing tiramisù is that it has to be chilled anywhere from six to 24 hours once assembled so the flavors can develop.

Always choose Saviardi or Pavesini ladyfingers which are broader, crumblier, and drier when compared to their French counterparts, which all aids in a lighter texture of the finished dessert.

Although the original recipe did not include any alcohol, today, it is considered almost obligatory to use one, be it Marsala, vin santo, brandy, or some fortified wine; the choice is yours.