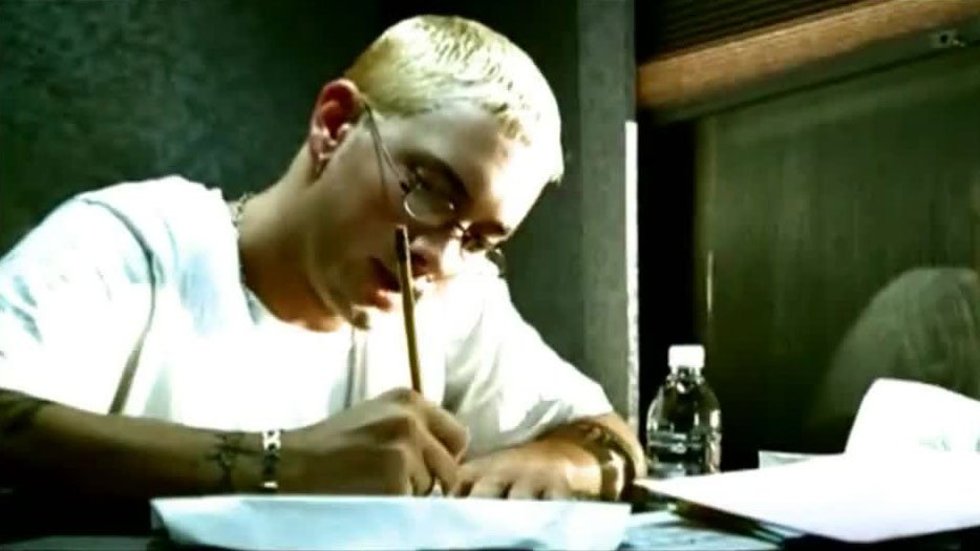 Eminem’s definition of Stan has now been officially added in the Oxford English Dictionary.

Althoughhis song ‘Stan’ is now 15 years old, it still features as classic hip hop track on many a playlist.

And it seems like the good folks over at Oxford English Dictionary also feel the same way about the famous track with Dido.

The track from his second album ‘The Marshall Mathers LP’ is all about an obsessive fan who goes to murderous lengths to try and get Eminem’s attention.

So, if you search the Oxford English Dictionary for ‘Stan’ the below definitions have been added on.

Noun: ‘An overzealous or obsessivefan of a particular celebrity’.

Verb: ‘To be an overzealous or obsessive fan of a particular celebrity’.

Chorus: Dido
My tea’s gone cold I’m wondering why I..
got out of bed at all
The morning rain clouds up my window..
and I can’t see at all
And even if I could it’d all be gray,
but your picture on my wall
It reminds me, that it’s not so bad,
it’s not so bad..

[Eminem as ‘Stan’]
Dear Slim, I wrote but you still ain’t callin
I left my cell, my pager, and my home phone at the bottom
I sent two letters back in autumn, you must not-a got him
There probably was a problem at the post office or something
Sometimes I scribble addresses too sloppy when I jot him
but anyways; f___ it, what’s been up? Man how’s your daughter?
My girlfriend’s pregnant too, I’m bout to be a father
If I have a daughter, guess what I’ma call her?
I’ma name her Bonnie
I read about your Uncle Ronnie too I’m sorry
I had a friend kill himself over some b____ who didn’t want him
I know you probably hear this everyday, but I’m your biggest fan
I even got the underground s___ that you did with Skam
I got a room full of your posters and your pictures man
I like the s___ you did with Ruckus too, that s___ was phat
Anyways, I hope you get this man, hit me back,
just to chat, truly yours, your biggest fan
This is Stan

[Eminem as ‘Stan’]
Dear Slim, you still ain’t called or wrote, I hope you have a chance
I ain’t mad – I just think it’s f___ED UP you don’t answer fans
If you didn’t wanna talk to me outside your concert
you didn’t have to, but you coulda signed an autograph for Matthew
That’s my little brother man, he’s only six years old
We waited in the blistering cold for you,
four hours and you just said, “No.”
That’s pretty s___ty man – you’re like his f___ing idol
He wants to be just like you man, he likes you more than I do
I ain’t that mad though, I just don’t like being lied to
Remember when we met in Denver – you said if I’d write you
you would write back – see I’m just like you in a way
I never knew my father neither;
he used to always cheat on my mom and beat her
I can relate to what you’re saying in your songs
so when I have a s___ty day, I drift away and put ‘em on
cause I don’t really got s___ else so that s___ helps when I’m depressed
I even got a tattoo of your name across the chest
Sometimes I even cut myself to see how much it bleeds
It’s like adrenaline, the pain is such a sudden rush for me
See everything you say is real, and I respect you cause you tell it
My girlfriend’s jealous cause I talk about you 24/7
But she don’t know you like I know you Slim, no one does
She don’t know what it was like for people like us growin up
You gotta call me man, I’ll be the biggest fan you’ll ever lose
Sincerely yours, Stan — P.S.
We should be together too

[Eminem as ‘Stan’]
Dear Mister-I’m-Too-Good-To-Call-Or-Write-My-Fans,
this’ll be the last package I ever send your a__
It’s been six months and still no word – I don’t deserve it?
I know you got my last two letters;
I wrote the addresses on ‘em perfect
So this is my cassette I’m sending you, I hope you hear it
I’m in the car right now, I’m doing 90 on the freeway
Hey Slim, I drank a fifth of vodka, you dare me to drive?
You know the song by Phil Collins, “In the Air of the Night”
about that guy who coulda saved that other guy from drowning
but didn’t, then Phil saw it all, then at a show he found him?
That’s kinda how this is, you coulda rescued me from drowning
Now it’s too late – I’m on a 1000 downers now, I’m drowsy
and all I wanted was a lousy letter or a call
I hope you know I ripped ALL of your pictures off the wall
I love you Slim, we coulda been together, think about it
You ruined it now, I hope you can’t sleep and you dream about it
And when you dream I hope you can’t sleep and you SCREAM about it
I hope your conscience EATS AT YOU and you can’t BREATHE without me
See Slim; {*screaming*
Shut up b____! I’m trying to talk!
Hey Slim, that’s my girlfriend screamin in the trunk
but I didn’t slit her throat, I just tied her up, see I ain’t like you
cause if she suffocates she’ll suffer more, and then she’ll die too
Well, gotta go, I’m almost at the bridge now
Oh s___, I forgot, how am I supposed to send this s___ out?

[Eminem]
Dear Stan, I meant to write you sooner but I just been busy
You said your girlfriend’s pregnant now, how far along is she?
Look, I’m really flattered you would call your daughter that
and here’s an autograph for your brother,
I wrote it on the Starter cap
I’m sorry I didn’t see you at the show, I musta missed you
Don’t think I did that s___ intentionally just to diss you
But what’s this s___ you said about you like to cut your wrists too?
I say that s___ just clowning dog,
c’mon – how f___ed up is you?
You got some issues Stan, I think you need some counseling
to help your a__ from bouncing off the walls when you get down some
And what’s this s___ about us meant to be together?
That type of s___’ll make me not want us to meet each other
I really think you and your girlfriend need each other
or maybe you just need to treat her better
I hope you get to read this letter, I just hope it reaches you in time
before you hurt yourself, I think that you’ll be doin just fine
if you relax a little, I’m glad I inspire you but Stan
why are you so mad? Try to understand, that I do want you as a fan
I just don’t want you to do some crazy s___
I seen this one s___ on the news a couple weeks ago that made me sick
Some dude was drunk and drove his car over a bridge
and had his girlfriend in the trunk, and she was pregnant with his kid
and in the car they found a tape, but they didn’t say who it was to
Come to think about, his name was.. it was you
d___!